Beer Bike - My two favorite things all into one!
Posted by westwoods at 7:24 AM No comments:

I found this site the other day.
It validated and explained a lot of the mysteries of stones in Westwoods. There are many balanced stones, shaped stones and arranged stones set in place by layers of moss. I'm not sure how old, but they do appear to be similar to the rock formations on the above site.

I Westwoods, I noticed some peculiar stones on a large slab of stone. Upon examination, I noticed that they all seemed "hollowed" or grooved... But also broken like puzzle pieces. I remember reading that Native American burials involved breaking favorite objects and wondered if that was the case here. Additionally, I imagined they might process food on this rock and just discard stone tools when they were no longer functional. It seems like there's more arrangement to these rocks though.... Here's some pics: 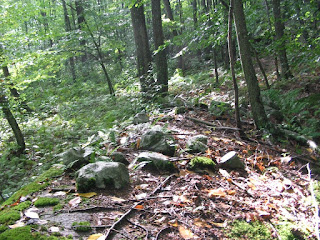 Chipped and grooved Stones on a slab - piled along the edge 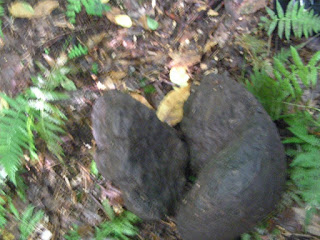 Sample of a stone I dug up that better illustrates the stones chipped groove areas.
This one seemed like a bowl. It would not have caught my eye, but for the fact that
so many rocks have the same groove or notch. Bowls? Supports for wooden beams?
I don't know.

I just know there are a lot that seem "arranged".

There are three spots that seem to have such arrangements.

The arrangements have not seemed to have been disrupted for a long time due to the molds and lichens on them.

And finally the rocks appear to share similar characteristics to the other "placed" rocks, and not so much to the rocks that appear to be random or occur naturally. 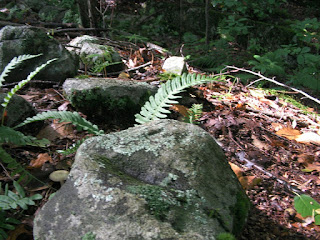 Here's one of the stones that are placed on top of the slab which appear to have some sort of chipping and or grooves. All the stones on this large slab have the same grooves. 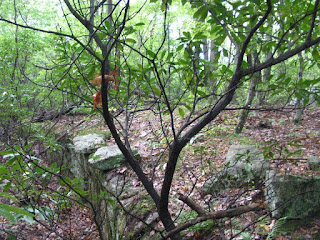 Flat wall like structure has rocks placed on the edge, and rocks of equal size below, which presumibly have been knocked off at some point. 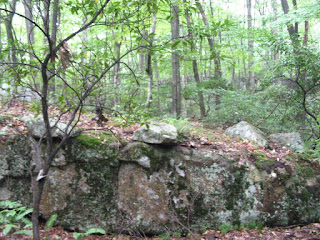 Then again, it might all be in my head.
Posted by westwoods at 7:29 AM No comments:

Labels: The woods and trails

Posted by westwoods at 12:32 PM No comments: