Man, I didn't want to drive that far. But I was doing okay in the Root 66 series, in fact I still think I lead 40-50 cat 3. And there was free Heady Toppper for the racers. My son Evan said he would go when I promised quarry swimming camping and seeing the Ben and Jerry's factory... 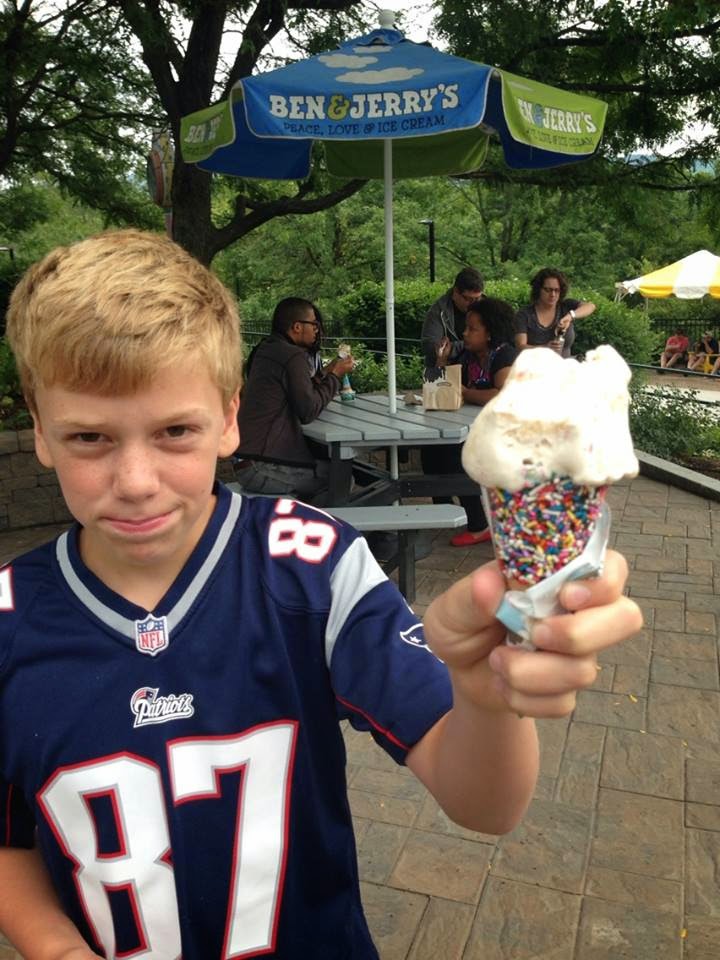 We bought a lot of camping shit like flashlights, air mattresses and flashlights and headed out with the Mazda CX9 loaded up with camping and biking stuff.


We left about 11am on Saturday. It was a long drive as expected to Barre, with one stop at the Vermont Welcome center. A volunteer there suggested we see the grave yard in Barre... We were not too excited about that.  We hit white river junction then went past the camp ground exit to hit Ben and Jerry's. The tour was horrible and over-priced, the Ice Cream afterward was incredible! It started to rain.

We headed south back toward the race, and Millstone camping area as indicated on the web. We stopped in the little store in a depressed hilly town, with hints of Granite quarry everywhere you looked. The guy in the store sold maps and owned the campground as well as the cabins/inns on the land. Somebody else owned the bike shop. We bought a map and didn't see anything we needed at the shop. 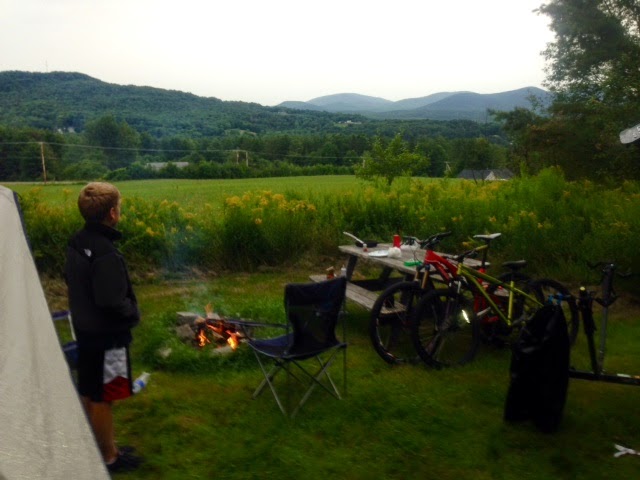 We followed the directions to the campground. It was still raining on and off. We set up our site quickly. We went to pre-ride the course, but my 11 year old worre out about one-third of the way, so I guessed I'd have to onsite it for race day. My Blur LTc was running fine, as per usual, it almost never complains and is ready to go when I am.

We decided we wanted to go to the quarry to swim. It was close by on the property, but we discovered we forgot towels. We needed towels so instead of swimming, (and maybe because it was cold), we decided to head into East Barre to the TJ Maxx for towels. It was important to cook a camp dinner so we were not going to stop in town for food. We bought towels at the greatest TJ Maxx I ever saw about 15 minutes away. 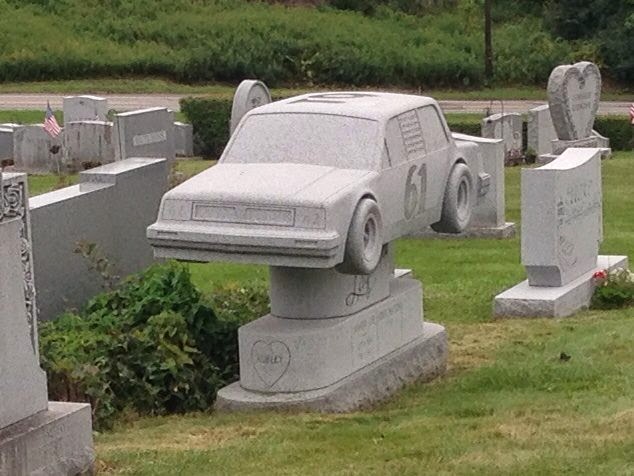 Then we realized we were passing the graveyard on the return trip. Evan said we had to go. Amazing. Stone cutters created statues for everyone. Beautiful sculptures, all looking like they were forged out of the granite last week. Closer looks at the dates revealed they were much older. It was amazing... Race cars, Soccer balls, full life images of the deceased to scale... pets very cool.

We got back to the camp, made a fire and ate our camp dinner. It continued to rain on and off.

We had towels, but it was raining hard. We went to the quarry to swim but as we were walking up the trail a sink hole started opening up in the middle of the path almost right beneath our feet... we decided maybe it was too cold and dark to swim.We went back to the tent and went to sleep. Instead of the rain letting up, it increased and poured heavily at times. Our little 4 man tent didn't leak a drop.

It was still raining the next morning. We made oatmeal and went to the race course. As they were lining everyone up, Evan went off a jump and shinned himself with the new Wellgos... He was very worried, and I had to apply bacitracin and hope I could get to my start in time. It all worked out in a nick of time. 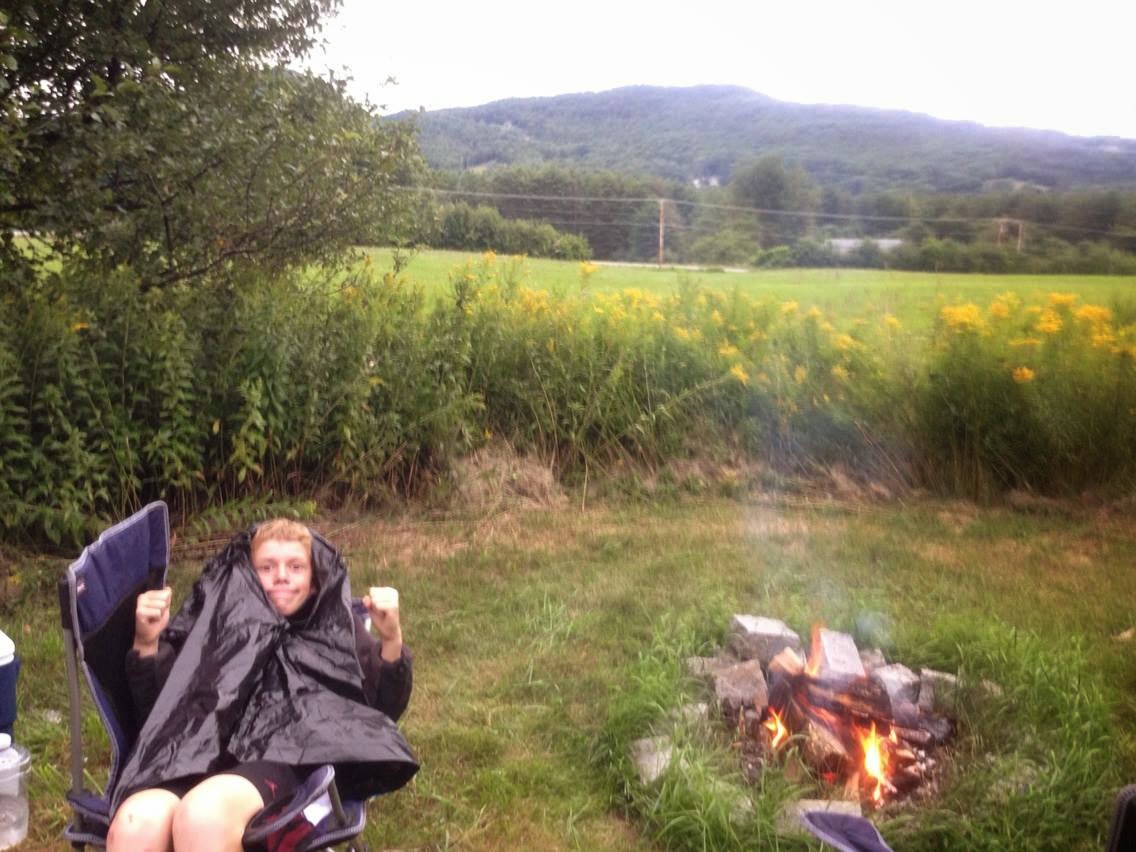 At the start, I realized my tires were about 28psi, and the roots and rocks of the granite tailing course were quite slick. I as worried it would be stupid to let air out 5 minutes before the race started, and I'm superstitious about making any changes on race day. So I decided to ride with the air pressure up. Big mistake. I also saw my major competition Andy Jacobs and lined up with him. He was a few points behind me in the series still, but he was faster than me in most races, even if it was only by seconds in some. I really wanted to beat him. But I also liked him a lot, and we talked about everything from bike parts to computer programming until about 20 seconds before the race start. I forgot about my tires.

The race course started up and across a field of wet grass. There were six of us in the cat, a small group for the races, but anyone who would race here would have to be skilled because it was steep, rocky and technical. We also started with the 50s and maybe a few others... so it was hard to tell who was who as we tore into the woods. I lost my breath in a panic on the hill and went from second to fifth of about 12 in our group in the blink of an eye. I got some back as soon as we hit the single track by choosing lines around those that failed across streams etc. My wind was back, but the majority of the first leg of the race was a long climb up the mountain.

In Cat 3 there are always locals and ride the trails all the time but never race, then the regular racers who may or may not have pre-ridden. The difference most of the time is that the local guys are used to riding, but not racing. Most start off fast but then fade, but may not enjoy the race etiquette of allowing the faster racers to pass. That is never a problem for Andy. He was one rider ahead and yelled as he made his move willing the slower racers, (I think by now we had run up against the younger cat's slower pack) out of his way as he shot by assertively The racer ahead of me and myself followed his slipstream... I didn't make it past all of them, however. I got caught behind one or two slow and surly guys, who took a lot of urging to "go faster they're getting away" to finally concede that they were not going to win the race this year and move over.

By this time, Andy and the other racer were out of site. This is always the mistake I make with him. But I felt really good. Maybe the wimpy preride with Evan saved my energy and I was climbing like a demon. I was not tired. At the top of the first hill was a long section of back and forth wet rooty turns over granite. It's here that my over-inflated Racing Ralphs told me how they felt about slimy roots. I went down once then twice, maybe more... but still felt great going as fast as I could. I caught and passed quite a few other groups... Now I'm by myself in the middle of the woods trying not to let up, and to catch the guys in front of me and not get caught. It's pretty quiet, with a few brake squeals and yells in the distance.

As I come up toward a few switchbacks I see a rider from Cat 2 I recognize through the woods. It's Kelly, a fast woman who is always on the Root 66 podium, seemingly. I know shes an E.R. nurse. She's bending over with someone looking over her shoulder. I think she's trying to help a downed rider, and I'm nervous about what I see when I turn the corner. Luckily, she's just working on her bike, the person helping her is her husband. I laugh as I go by and try to relate that I thought she was working on a person not a bike. I wish her luck. Her second cat 2 lap shows faster than my one cat 3 lap, so maybe my luck wish worked.

I came out of the woods and saw Evan cheering. He took a what later proved a crappy picture of me and seemed really distracted by something behind me. I thought it was a crash, but he later told me a couple of deer came charging out of the woods and almost hit other racers. They weren't expecting the field to be filled with spectators and bolted in a few directions. Anyway, back up into the woods the race went on, more people to pass. 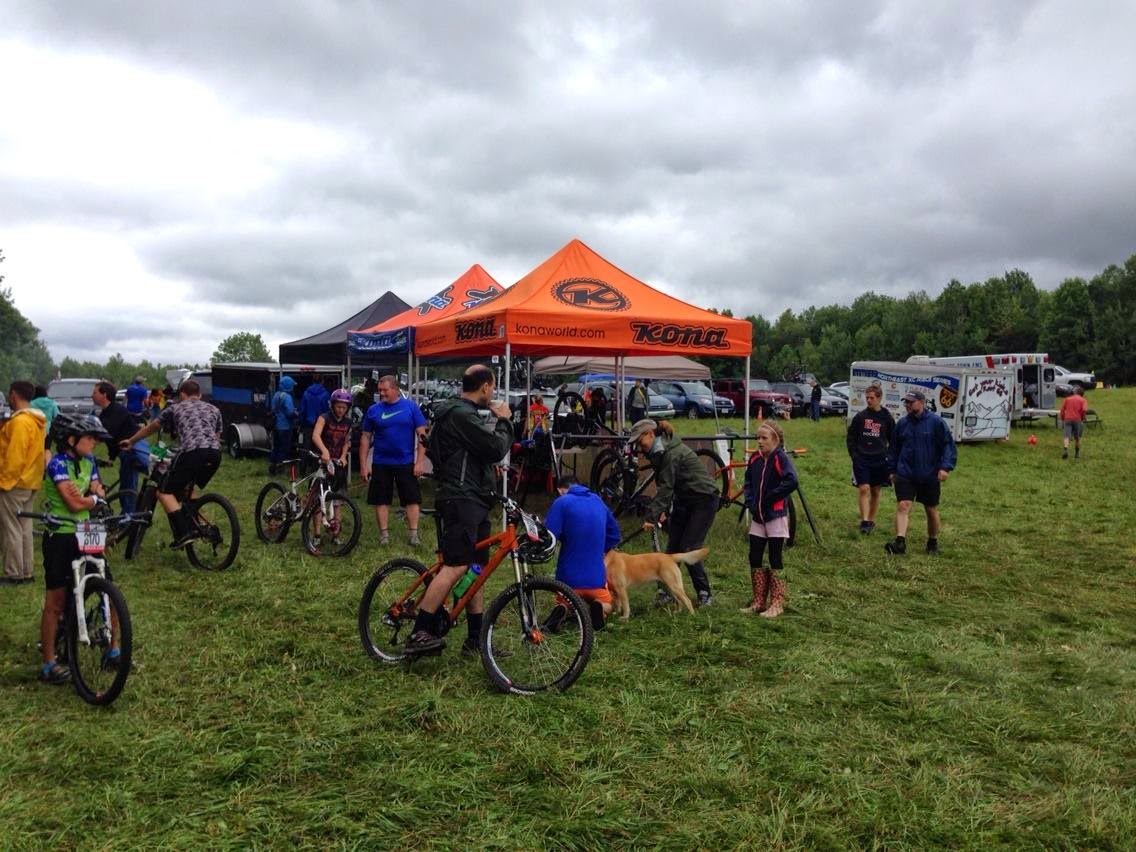 Incredible wooden bridges dozens of feet over green quarry rocks and moss. Angular rocks from abandoned quarries everywhere in piles. Large granite cliffs straight down to black lakes of water jumped out of the woods around many turns... Technical and fast. All pedally and ridable. 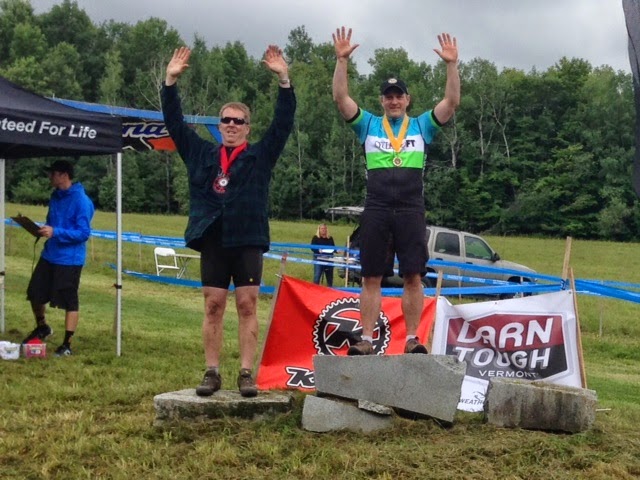 Then at the end, (I had no idea where the end was)  two teenagers caught me from behind. I thi k I passed them once already on the climbs, but they were back. I noticed how well their tires held in the corner as I went down again, or slipped with a close call, only to mount up and accelerate to drop them repeatedly. Stupid Over-inflated Racing Ralphs.

Finally, one teen rider snuck by and started to make a gap. The race course is straightening out now, fast and flowy double-track to single track... and later a series of long straight downhill runs with jumps and rocks.  The kid in front of me had obviously ridden here before. He knew every turn. I went much faster than I would have normally, but I trusted that if he could go that fast so could I. We burst out into the field and hit some wet turns to the finish. Me seconds behind him, his friend and his twin brother fractions behind me. Andrew and the other Cat 3 guy who jumped at the start were a minute ahead at this point. 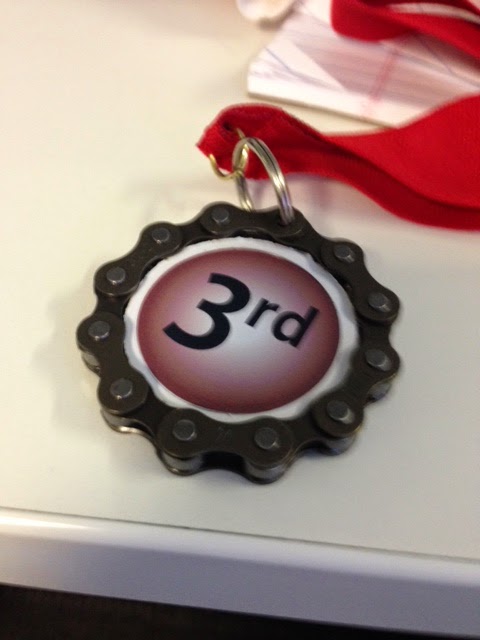 The rain had fully stopped now, and I saw Evan. He said I was third. He came with me and Andrew to the beer tent and cashed in our tickets. The soda was free for Evan, the Heady Topper was free for Andrew and myself. The number 2 guy had to leave for his daughter's soccer game as par for the course for our age and category.

We met some other regular racers from other cats and ages and recapped the excitement and fog of the race. Evan had his shin looked at by the ambulance driver who said it was fine. I noticed quite a few scrapes.

Next was the podium where I got third, then a long ride home. Evan said it was a great weekend and wanted to camp all the time from now on.


Posted by westwoods at 1:43 PM No comments: