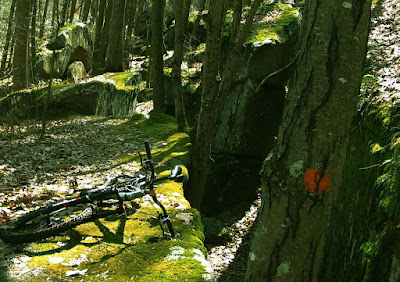 green moss and caves on orange trail by green trail
As temperatures bring my riding out of the hunkered down, calculated trail traversal where I plan my rides around how long my toes can avoid frostbite, to really taking in the woods and absorbing everything the trail has to offer.

At Easter, I ride with my son. We found new corners of Westwoods that I had not explored as fully. We entered on the white trail off of Yankee Peddellar where the white trail meets the boardwalk. There we found old caves that had been filled in with rocks. Why would these caves be backfilled?, I thought... Not deep enought to worry about collapse... My guess is to keep animals of any size from homesteading there. Old bottles litter the trail by the entrance. Old dumps and new dumps (fill) are the gateway to the path less travelled.

The trails are drying out nicely, and I keep thinking about how I can advocate "no skidding" by urging any skidders to take their riding to a new level of skill by not EVER skidding the tire anywhere, (unless of course you are teaching your 8 year old how to skid for distance in your driveway).
Posted by westwoods at 6:33 PM 2 comments:

Balancing out of balance

I am disturbed by an odd proliferation of rock statues... Lord knows, I'm no fan. But I was actually happy to see the grotesque overbuilding and dismantling of old walls for self-congratulation in recent weeks... 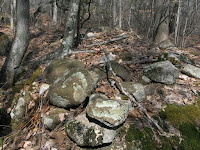 Pics on this page show ancient rock piles in various states of moss covering.
Most appear to be placed, or piled intentionally or removed out from somewhere else. But if these piles are gone, so too will be the clues they may have held, and the wonder they provide to those that care to look.

Maybe the builder seeks attention from the local paper. Maybe there's an army of subculture's, balancing every loose and otherwise rock they see. Maybe its my own fault. I confronted a rock balancer several weeks ago. But later apologized, and just requested moderation and care. Maybe its their revenge. Or maybe its a new natural fad.... Geo rock balance caching... or whatever... Whatever the reason, whatever the cause, it has spread through Westwoods like poison ivy, or a new blight. Leaving the landscape out of balance once again in its history.

I fell through one as it was built on top of a rock jump we've been fond of for the past ten or so years. It felt almost good to smash through it... Sent me off course somewhat... The stick cutting my leg didn't feel as good as I was veered off course into a dead hemlock. I hope that's the worst injury that comes of these...

...But I don't want to see any kid hurt because somebody craves attention this badly... Now I'm not one to exaggerate, but I counted well over fifty along the blue trail last Saturday. Maybe more than one hundred. Each rock helped anchor in soil, was a home, artifact or held some other minuscule role in nature and or history. None are significant alone, but subracted by conscription into an army of rock balancing statues their abscence in the forest floor may be felt...

Rock balancers remove choice rocks from the trail, loosening a vital component of the firma "terra firma", (or maybe its part of the "terra"... Anyway the dismantling of old walls, and other "natural or prehistoric" formations in order to say "look what I can do," used to bother me... 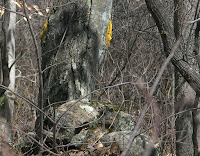 Someday this may be the only record of these old stone piles. And that's fine if its only me that sees something valuable in their existence.

As I said before, I'm glad its getting so prolific. Now since whomever is doing it, seems to be totally out of balance, I'll wait until they piss enough people off with their over the top messing of the natural scenery. Those who care and make rules, will have to add a provision to the land trust bylaws that includes dismantling or disturbing rocks to the reluctant list of rules, by sheer preservative necessity. Yay, more rules! Thanks stone dude[s].

These rocks were piled for some reason, (maybe important, maybe not so), long ago [ancient rock balancers?]. So long ago, that many are fused with layers and variety of lichens and mosses.

Just Tear them up and balance them.... yay.

Anyway, its beyond me... I resign to riding and preaching "non-skidding"... (of course, after making my case well heard in this post).
I will let others decide when too many stone walls, rock piles, ancient graves, and not to mention the anchors of soil to the trails themselves are disturbed and destroyed.I'm grateful to have the woods to ride through. I'm not the one to decide what is out of balance for all.

... But the proliferation of self-grandiosing rock balancing sculpture numbering near one hundred in about a quarter of a mile, then also everywhere else...

To defend the practice again, I can see how one or two special rock balancing locations might be fun. Even better would be a secret zen rock garden...
Recycling the smoothest of rocks and arranging them for hours at a time...slow down! But, now we have hundreds of balanced obstacles to site and bike, in our face everywhere in Westwoods. It seems like a lot of rocks displaced to me, (but not so bad as when I was a quarry Westwoods sighs)... 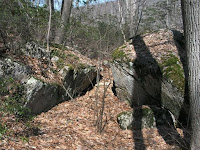 As a simple bike endowed creature of the forest. I will continue to clear inconvenient trees from my favorite trails, break up flooding where it overflows streams, or does not serve my trails by draining, but other than that, I prefer to co-exist with the woods and disturb as little as I can.

I'll watch the frenetic stone pile building, until this chapter too runs it's course. I'm just sad to know that my kids may not get to wonder at rocks like the moss covered mounds and piles on this page. They will know that these rocks were moved by those with an innate need to see newly man-made objects everywhere...even deep in nature.

Posted by westwoods at 6:07 PM No comments: