Root 66 Race Series - A New Twist to My MTB Obsession 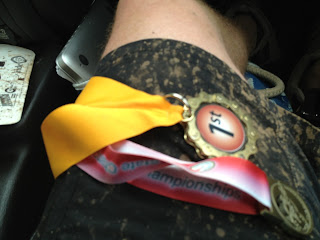 I got in a few races this year with the Root 66 Racing Series. Started the year where I left off last year, mid-pack at Hop Brook, where I lost 9th to this guy I rightly beat, due to someone running across the finish line and causing me to serve out of bounds.

As usual I thought we were first and second place. I usually think I'm doing better than I am. It doesn't really matter though. It's great to gather with equally obsessed people and talk about bike parts and trail lines. Something my wife and kids can't generally tolerate. (When I ramble on about Chris King, they generally think I'm talking about a co-worker).  I handed ninth to a guy named Mike. He would follow me through a later race at Winsted Woods, where I took second and he got third,  then move on to spank me rightly in the Massachussetts Races, (Domnarski's Farm, and Hodges Village Dam).

As a consolation, I did take first place for CAT 3 40 to 49 at the gnarliest race, Wrath of the Boneyard in Meriden. It rained and provided me with horribly muddy and slippery conditions that gave me  the technical edge over the climb-happy roadies.  It was one of those races where you feel like you have unlimited reserves of energy. The first lap, I broke away from everyone with some teenager from a prep school in Mass. He was into DH riding and we stayed clipped-in throughout the nasty gravel pits and root gardens. I passed him on the climb feeling invincible, and started to slack off a little to reserve my energy, until a 50 year old rider came up like a ghost behind me and passed me with another guy from my class at the end of the first lap. But the nasty wet and slimy DH gravel, trap baby-head, roots returned with a blast of downpour. Now the trail was even looser and less predictable. I passed the roadie-types and remembering how they caught me on the climbs, I forced as much distance between us as possible in the techs. As the climbs approached, I latched onto a kid who was killing the climb, with spikes on his hard tail's top tube. I urged him on as he slowed, but when I finally passed him I noticed he was out of gas. I was surprised that for some reason I was not. As we got to the small downhill before the last climb, I noticed the ghost and maybe another rider behind me closing. I clamped down and pedaled with everything I had to even extend my lead for the win, although I didn't know it at the time. Wife and kids were there to cheer. I got the gold and the state champion medal that day. And some grips. 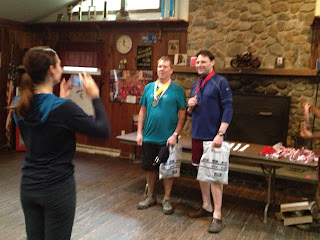 The rest of the summer, I rode casually, went to Colorado, skipped a race or two for no reason. I noticed that I remained the points leader. I was planning on finishing the season in first place. But then the Millstone grind came around, in North Nowhere Vermont, my mom got sick and was in the hospital. I was torn whether or not to ride up with Mike, for 5 hours. He had just beaten me by like 10 minutes in a cramp-filled outing at Hodges Village Dam. 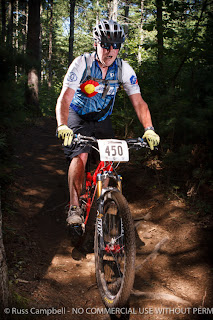 I barely squeaked by in 6th place and was disoriented at the finish. I did some math and figured I could probably skip the Millstone Grind and remain in first place as we went into the Landmine. But I'm bad at math and Mike discovered that he was not listed for a race after the Millstone. He finished first in VT...  So by skipping Millstone, which might have kept me in first or second, I'm waiting for the Landmine insecurley in third place. My mom is fine now. I've been riding harder and hoping I can finish this last race with no cramps or mechs.

I've ridden a 2012 Racing Red Santa Cruz Blur LTc all season with 650bs, and it been solid and fun. I think the edge it gives me comes from running a 36 front crank double. ... That and the red which everyone knows is the fastest color. The fork is starting to feel a little clunky, so it might need a rebuild after serving me well for the season. And the frame linkage or rear Sun Ringle wheel is clinking when I bear down on the pedals. The linkage is the most likely culprit, but the rear cassette seems to quiet down when I crank it tight to hub. Anyway only needs to stay put for one more race.


Now I'm rooting for Mike to win it all. Though I'm not even sure what that means in terms of medals and prizes. Usually cat 3 is the bastard step-child of root 66, prize and podiumwize.... But it might be nice to get a water bottle or shirt or something nonetheless.

I'm 48 and this could be my last (only) season racing, but it sure added some excitement to the year. I can also say that I'm the state champion for my age and CAT 3 since I won gold at the Boneyard. I have a gold and a silver. No bronze, so if I can finish the season in third place in points, that will round out my podium placement. Ten its back to local rides and adventures with my kids, looking for arrowheads and keeping westwoods tidy. But if that doesnt scratch my itch, maybe ill come back for my last year in 40-50s to race all the youngsters before I age out... But lets not think too far ahead for now... Landmine.
Posted by westwoods at 6:36 AM No comments: